The Institute of Electrical Machines, Transformers and Apparatuses (IEMTА) with its curriculum, scientific and research and applied activity fosters the following areas of interest: electrical machines, transformers and apparatuses as well as renewable sources of energy.  This Institute provides first, second and third cycle of studies. In addition, the scientific, research and applicable activity is realized in co-operation with projects and studies resulting from the established co-operation with national companies, as well as with international universities, institutes and institutions. As a result, members of IEMTA have published many of their scientific papers in renowned international magazines and have presented them at both national and international conferences. 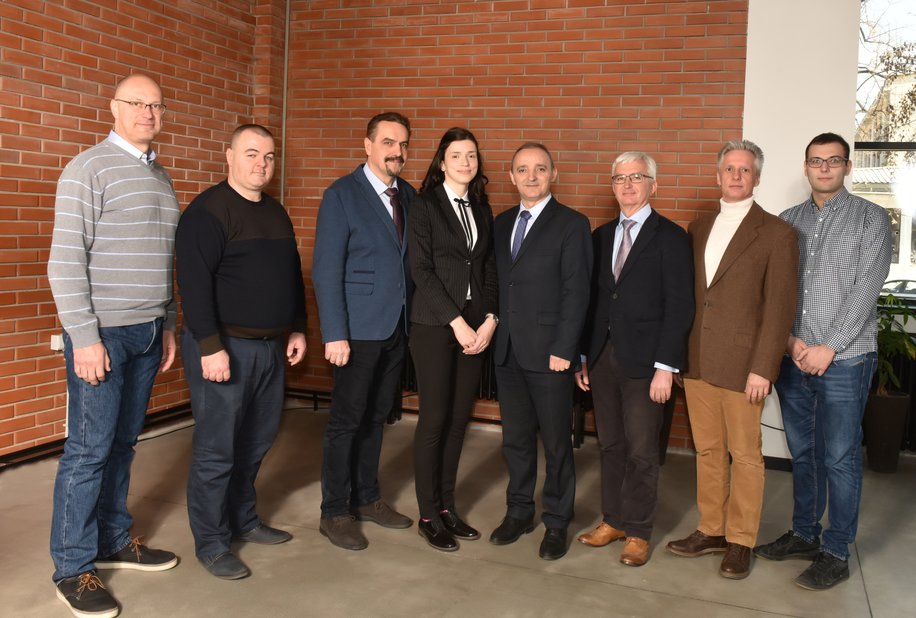 Since its foundation in 1961, the following professors have been part at the Institute: prof. Dionis Manov, Vanco Georgiev, prof. Blagoj Dimitrov, Mladen Alcev and Kiril Daskalov. In 1970, the number of employees at the IEMTA was increased with following professors: prof. Lidija Petkovska, prof. Milan Cundev, prof. Damjan Hristovski, teaching assistant Gjorgji Takashmanov, Zivko Simonovski as well as technical associate Dimitrija Anastasovski. It should be noted that the first and the second generation of the IEMTA members have provided a significant contribution in the development of all major activities related to electrical machines, transformers and devices. Professor Slobodan Mirchevski, who was a member of the Institute of Electromotive Drives as of 1979, joined the IEMTA in 2015.

Upgrading of the IEMTA team is our prime importance. Hence, Vlatko Cingovski has joined the Institute in 1986, Vlatko Stoilkov and Goran Rafajlovski (1988), Krste Najdenkoski (1992),  Goga Cvetkovski (1997), Mihail Digalovski (2009) and Maja Celeska since 2013. So far, four generations of teachers have participated at the Institute’s undertaking and development. The Institute has adjusted and modernized its curriculum in accordance with the contemporary developments in electrical engineering and the industry, and in line with the current reform in higher education.

Furthermore, the development fostered on the part of the Institute, which has widened its scope in the afore-mentioned fields, has contributed greatly to the introduction of more subjects in both second and third cycle of studies.

So far, a significant number of Electrical Engineers have graduated with more than 100 M.A. degrees. Also, the number of Ph.D. degrees obtained is well above 20.

It should be noted that members of IEMTA have participated at both bilateral and international projects. Their endeavor has contributed greatly in the development and improvement of the curriculum and scientific and research activity, and the following projects should be singled out: TEMPUS Project ‘Restructuring and Up – Dating Power Engineering Study’, ‘Application of FEM in Design and Analysis of Electrical Machines’, ‘Measurement of Wind Energy Potential in Macedonia’, FP6 Project ‘Renewables for Isolated Systems – Energy Supply and Waste Water Treatment’, Horizon 2020 Project ‘Near Zero Energy Buildings’, ERASMUS + and ‘Project Virtual Reality Laboratory for Mechatronics’. Also, practical results from scientific research and collaboration have been published at many national and international conferences and  magazines such as : ‘IEEE Transactions on Magnetics’ and  ‘IEEE Transactions on Power Apparatus and Systems’, ‘COMPEL’, ‘ER (Electrical Review)’, ‘Electromotion’, ‘International Journal on Studies on Computational Intelligence – Springer’, ‘International Journal of Applied Electromagnetics’,‘Mechanics-IOS Press’, etc.

In 2006, our Institute has hosted the Macedonian-Polish Symposium on Applied Electromagnetics in Ohrid, as well as additional one later in 2016 in Skopje. Some of IEMTA members participated in the organization of a few international conferences, such as: EPE-PEMC 2010, ISEF’ 2013, EUROCON’2017, and they were also active at international conferences for great electrical systems such as CIGRE Paris (via CIGRE Macedonia). In addition, our Study Committee has played a significant advisory role.

It is understandable that scientific, research and applied activity is of prime importance at the IEMTA. These activities are intertwined often, since a significant number ofprojects are resulting from the collaboration in the electrical engineering industry and affiliated companies. This co-operation is dating back to 1970s and resumes to these days. Within the frame of the scientific and research activity at the IEMTA, more than 20 research projects have been undertaken. Applied activity, too, plays a significant role for the needs of the national economy as we have been actively involved in a more than 100 projects. For this undertaking, the equipment and devices available at our Laboratory have played a significant role for the needs of both the economy and the electrical engineering sector.